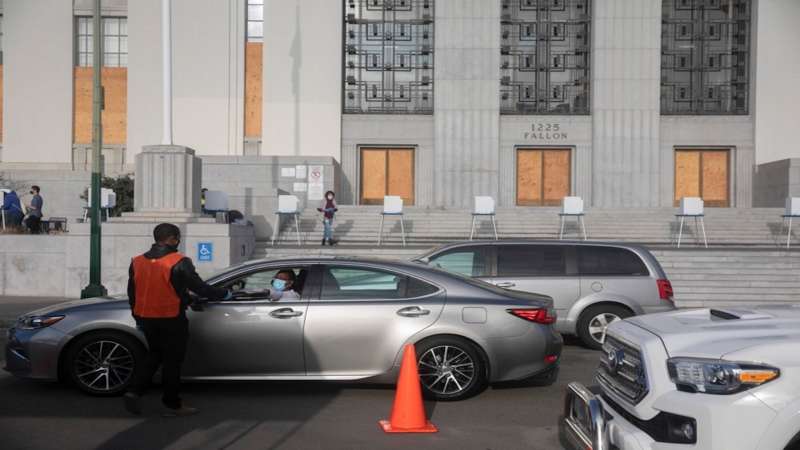 California prepared for the worst but voters largely were masked and socially distanced, and unrest was limited to isolated protests.

California prepared for the worst on Election Day and most of its worries came to naught.

Businesses that boarded up windows because they feared looting and rioting instead mostly saw calm. Poll workers were trained in how to handle voters who showed up without masks, but were mostly met with people who wore their masks and socially distanced.

Californians who hand delivered ballots early for fear of late mail or lost ballots appeared to have overreacted: election officials have not seen concerning problems with missing ballots. Lines were reasonable at polling places. No glaring technology glitches shut down state voting.

That doesn’t mean Election Day in California was without hitches. Dozens were arrested in Los Angeles after a party at the Staples Center polls turned into a protest march and police said they wouldn’t disperse. And a bogus vote center in Westminster was busted by activists with social media savvy.

“I think we had a great election in California, especially in light of the challenges voters and election workers faced in conducting an election during a public health crisis,” said Kim Alexander, president of the California Voter Foundation, a voter advocacy group.

Tuesday’s election may well be a record for California. County officials say their numbers don’t yet reflect final vote tallies, but when they do they expect a record turnout.

In Santa Clara County, for instance, 751,000 total ballots have been received, and more are expected as the mail comes in. By contrast, ballots received in 2016 totaled 724,000, said county spokesman Ryan Aralar.

Other counties reported similar trends. In Sacramento County, 342,756 ballots have been counted, less than half. The county has another 359,244 ballots to count, plus provisionals and all mail ballots postmarked no later than election day that arrive within 17 days.

“This estimation puts projected voter turnout at just about 80 percent, which  is a county record,” said spokeswoman Janna Haynes.

Napa County’s Registrar of Voters, John Tuteur, said he expects similarly high vote totals. “I expect us to surpass our highest turnout in the past 50 years of 84.4 percent by at least a couple of percentage points,” he said.

“I’m especially proud of the millions of California voters who returned their mail-in ballots early.”

54 percent as of the end of election night but many ballots still were not processed and counted. An updated figure will be posted late Thursday, according to the Secretary of State’s office.

Election day vote reporting was smooth, said Secretary of State spokesman Chris Miller. Every county delivered vote tallies to the state office as required. Any delays in counting are largely due to California’s decision to mail a ballot to every voter in the state — the first time ever  — to prevent the spread of the coronavirus.

Of the more than 22 million ballots sent out, 11.8 million were returned by Nov. 2, according to the Secretary of State’s office. Many who wanted to vote in person had the option of voting at a vote center or polling place that opened three days before Election Day.

Voters were asked to wear masks when inside vote centers, though it was not required because people have the right to vote. Most people complied, officials said. In Sacramento County, a few people would not wear a mask, so poll workers set up a secluded location to vote.

“I’m especially proud of the millions of California voters who returned their mail-in ballots early,” said Alexander of the California Voter Foundation.

The day was not entirely smooth. An unusual problem came in Orange County, where activists stumbled onto a fake vote center and reported it to authorities.

Ty Bailey, 19, an organizer for OC for Black Lives, said a fellow activist from another group spotted a hand-written” Vote Here” sign in Westminster and called him.

He went to check it out and meet with others who had been there before him.

“They were seeing people going inside,” he said. He took a photo of the sign. At the so-called center, “I started to notice people were getting anxious,” he said.

Keep tabs on the latest California policy and politics news.

He posted a video on Instagram, called a local newspaper and Westminster police. The story was widely reported.

Businesses, fearing a repeat of summer’s civil unrest, boarded up their windows in the days leading to Election Day. But police in major cities across the state reported no major incidents.

CalMatters checked with police in Sacramento, San Francisco, Santa Clara, Santa Ana, San Diego, and Long Beach and each said they did not observe any damage  to property or unlawful assemblies.

In Los Angeles, however, police arrested dozens. Outside Los Angeles’ Staples Center, a peaceful and festive Black Lives Matter “Party at the Polls” during the day turned into a late night march into the streets.

Police arrested 46 people, including five minors, saying they did not disperse when ordered. Three additional people were arrested for other reasons, including one on suspicion of battery against a police officer. And 32 people were cited, including two minors.

Bailey livestreamed the march on Instagram. He said about 100 people participated. “People were arrested pretty brutally,” he said, adding that he saw “officers use batons to press back against protesters.”

Though such incidents were not widespread across California, police officials said their departments will continue to be vigilant or have extra officers available in the coming days.

“We will continue to monitor regional, state and national events that could have an impact on the City of Long Beach,” said Arantxa Chavarria, Long Beach police spokeswoman.

“Multiple city departments are working together to ensure that First Amendment and election-related activity continues to occur with no disruption and that we, as a city, are prepared to respond to any community safety concerns,” she said.

Some business owners aren’t yet reassured.

DTLA Bikes is one of many downtown Los Angeles stores that boarded up its windows. Enrique Serrano, a salesperson, said they might keep the boards up for “like a week or two, from what it looks like.”

Area stores are closed today, he noted, including Grand Central Market, a longtime famous plaza home to dozens of restaurants.

This coverage is made possible through Votebeat, a nonpartisan reporting project covering local election integrity and voting access. In California, CalMatters is hosting the collaboration with the Fresno Bee, the Long Beach Post and the UC Graduate School of Journalism. 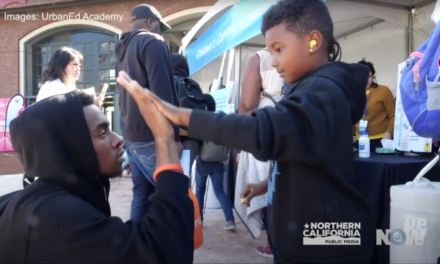